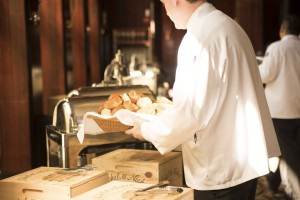 Lawmakers in the District of Columbia have voted to raise restaurant server minimum wage and other cities across the USA are seemingly following suit. The promotion for the legislation of increasing restaurant minimum wage is a particular concern for restaurateurs who employ 10% of the US workforce.

How Does Minimum Wage Affect Restaurants?

The primary concern which they all have is that mandating for raising restaurant minimum wage will increase labor expenses and decrease their profits which may put their business in jeopardy. To ensure their survival, they feel employee layoffs will have to be made or that they’ll have to raise menu prices – making their restaurants less accessible to the middle and lower classes. On the flip side, however, proponents for higher server minimum wage firmly believe that the increase will give more buying power to consumers which can have a positive effect on the economy and ultimately compensate for the loss of revenue due to increased labor costs. Additionally, they ascertain that updating the minimum wage law for restaurant employees takes precedent over economic growth.

What is the Minimum Wage for Servers?

The federal minimum wage currently remains at $7.25 per hour with minimum wage for tipped employees at $2.13 per hour, according to Nation’s Restaurant News. In 10 states, the increases are seen as a transitioning phase to reach $15.00 per hour. Eight more states have agreed to increase the hourly server minimum wage to adjust to the annual cost of living.  Washington D.C. and Oregon have witnessed a wage hike back in July. In D.C., the minimum wage of $12.50 per hour has risen to $13.25 and the minimum wage in Oregon has spiked from $10.25 to $10.75.  Wage rates for restaurant employers in the Portland area are even higher. 17 more states have campaigned for the increase in state minimum wage, reported the National Employment Law Protect.

Wage vs Tips: How you should pay your Staff

The topic of minimum wage alone has sparked a debate between proponents and opponents as it affects many people and businesses alike. Numerous points of view on this issue are still being challenged. It is, unsurprisingly, a divisive issue fraught with competing arguments.

Many restaurant labor laws are derived from the FLSA (Fact Labor Standards Act), an act which Roosevelt signed in 1938 stipulating the standards set for full-time and part-time laborers in Federal State, local governments and in the private sector. The FLSA establishes the rate for minimum wage, overtime pay, and recordkeeping as well as child labor laws for the food service industry to abide by. The FLSA minimum wage requirements entitle non-exempt workers to the federal hourly minimum wage unless the employee’s state’s law demands a higher wage. Hence, tips may be considered to be part of the wages but the minimum wage for tipped employees may not be less than the established rate. Employees who work over 40 hours per week is eligible for overtime pay which is 1 ½ times their regular pay rate. Likewise, employers are required to pay tipped employees who work overtime 1 ½ times the acceptable minimum wage but not 1 ½ times the tip rate they receive.  As for minimum wage requirements for youths, employees under the age of 20 are to be minimally paid $4.25 an hour during the first 90 days of their employment.

The FLSA essentially outlines the legal parameters for wage and tipping practices. But sometimes ensuring that your servers are earning minimum wage with tips can cause accounting complications. While the size of staff and volume of customers may vary per restaurant, tracking and recording server tips can be a daunting task to many restaurant owners. If tips are not accurate counted and reported, employers can face heavy fines as well as law suits related to improperly distributed pay. Restaurateurs, for this reason, need to carefully decide on best payment strategy for their business.

Balancing Restaurant Expenses without Compromising on Quality and Service

The entire issue boils down to the notion helping those with little while taking a bit from those who have more. With the widening gap between the wealthy and the poor, fighting for those who are struggling presents a moral issue more than a business one. Restaurants can react to the minimum wage hikes by:

Some of this can and will happen as restaurants live on the smallest of margins after all. Labor is the biggest expense. Increasing minimum wages can especially hurt small restaurants the most. However, there are ways for restaurateurs to restructure expenses in compliance to the minimum wage laws without them affecting quality and customer service but above all: firing staff. A little bit of strategic thinking, creativity and ingenuity can go a long way.

While the spike in minimum wages can interfere with employee recruitment, retaining current staff is one of the best ways to keep your labor costs down in long term. If you invest in your current term, monitor their progress and provide them with proper training and guidance, it will boost employee morale and create genuine loyalty to you. They will deliver better service, look after you, and respect your bottom line.  If you are looking for affordable solutions to updating your layout as you feel necessary, there are commercial grade furniture distributors who are willing to find the right restaurant furniture for your budget. You are likely to find restaurant tables and chairs  sold at negotiable prices.